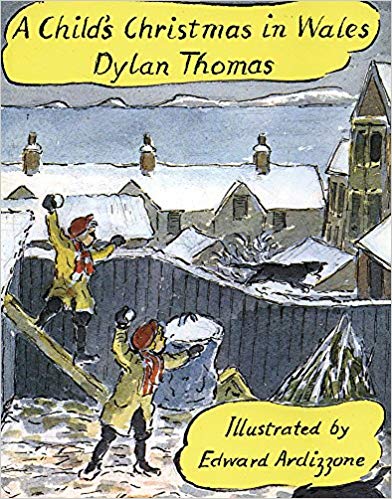 It’s a nostalgic and funny account of Christmas time in Swansea, south Wales, during the years of Thomas’s youth.  Here’s the description of what happens when there is a fire at the Prothero household:

was announcing ruin like a town crier in Pompeii…

the house, laden with snowballs, and stopped at

the open door of the smoke-filled room.

Something was burning all right;

perhaps it was Mr Prothero, who always slept

there after midday dinner with a newspaper

over his face. But he was standing in the middle

of the room, saying, ‘A fine Christmas!’

and smacking at the smoke with a slipper.

as she beat the gong.

‘They won’t be there,’ said Mr Prothero,

There was no fire to be seen, only clouds of smoke

and Mr Prothero standing in the middle of them,

waving his slipper as though he were conducting.

‘Do something,’ he said.

And we threw all our snowballs into the smoke –

I think we missed Mr Prothero – and ran out

of the house to the telephone box.

‘And Ernie Jenkins, he likes fires.’

But we only called the fire brigade, and soon

the fire engine came and three tall men in helmets

brought a hose into the house and Mr Prothero

got out just in time before they turned it on.

Nobody could have had a noisier Christmas Eve.

And when the firemen turned off the hose and

were standing in the wet, smoky room, Jim’s aunt,

at them. Jim and I waited, very quietly, to hear what

she would say to them. She said the right thing,

always. She looked at the three tall firemen in their

shining helmets, standing among the smoke and

cinders and dissolving snowballs, and she said:

The edition shown here is published by Hachette Children’s Group.  Many thanks to them for the use of the cover illustration.